To “Unite the Seven,” we have to take a deep-dive into the sixth installment in the DC Extended Universe. The James Wan directed film about the aquatic-human known as Arthur Curry to some and as the titular hero, Aquaman, to everyone else. Jason Momoa stars as Aquaman and the movie serves as an origin story, a Justice League sequel and a soft reboot of the DCEU because it separates itself from the Snyder era of films. The film deals with Curry’s journey from being a hero to the obstacle of transitioning from heir to King of Atlantis. Like the trenches of the deep-sea, this review will start with the best aspects of Aquaman and I’ll dive deeper into the things that cause this film to sink to the ocean floor. Spoilers after the trailer.

The best thing about Aquaman is that the production crew took their time when designing the sets, costumes and the visual effects. Atlantis is vibrant, full of color, and the movie explains this in a smart way by saying that underwater the Atlanteans’ have night vision, which allows everything to light up on the ocean floor. The costumes for Aquaman, Black Manta (Yahya Abdul-Mateen II), and Ocean Master (Patrick Wilston) were well done and contributed to the film looking like a cartoon come to life. Check out some of the images below. 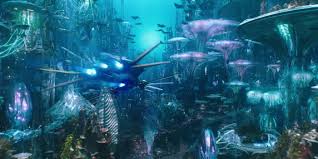 James Wan’s direction behind the camera should not go unnoticed. If you’re familiar with the Saw series then you’ll notice some of the interesting long takes Wan uses to keep the action moving. There’s a fun take around the second act where Mera (Amber Heard)  is fighting a few henchmen and Aquaman is fighting Black Manta in Italy, and Wan uses this long take to show two fights without using a single cut. It’s arguably the best fight scene in the film. Earlier on, there’s a smaller scene where Atlanna (Nicole Kidman) fights off a group of henchman and Wan uses this same filming technique which was fun to watch.

Aquaman’s leading actor, Jason Mamoa, seemed to be the only one on-set to know that this was a superhero movie. He seemed like the only person who was having fun during the duration of the 2 hours and 23 minutes of the movie. His character’s “bro” demeanor  was a continuation of his portrayal in 2017’s Justice League and Aquaman needed more of that to give it some personality. Mamoa’s character had a lot of quips when the quips were needed and those were some of the genuine laughs the film offers. His relationship with Amber Heard’s Mera does not feel authentic at all and the pair comes off as forced.

When we deal with the characters in Atlantis, everything is too serious, which makes the film feel dull. When Patrick Wilson’s character sets his sights on uniting the seven seas of the ocean and one of his goons tells him that he will be “ordained as Ocean Master,” the dialogue and delivery are unintentionally hilarious. Later, Wilson says that “I am the Ocean Master,” and that would’ve been a PERFECT time for Aquaman to ad some type of quip for humor purposes.  Willem Dafoe is wasted as Nuidis Vulko. Knowing that Dafoe is an incredible actor, the role could have been given to anyone, as a mentor to Aquaman and the results would’ve been the same. Even the surfaces characters are laughable. When we’re introduced to Black Manta he’s telling Aquaman, he’s scoured the seven seas and that’s why their paths have crossed, while sounding like Captain Hook. Manta gets treated as a small character in this film and it’s a shame because, as mentioned above, the costume design team did such a marvelous job designing him.

There’s too much going on in this movie to the point that Aquaman never settles into a cohesive tone. The scenes that Arthur Curry spends with his father early on in the movie are fun. The writing laid the King Arthur semblance extra, extra, exxxxtraaaa thiccc. At that point I was waiting for a character named Merlon to come out of hiding. I’m not even sure how Atlantis could be that deep in the ocean but have characters that come off as dry. The scenes that happen above the surface try to have their charm, but outside of the action scenes they’re not that fun either. The Titanic, or the biggest wreck of the film, is the fight scene after Aquaman makes his journey to receive King Atlan’s mighty trident. There’s CGI everywhere, and the screen is cluttered to the point where you don’t know who’s good and who’s bad. There’s crustaceans fighting crustaceans, some are good, some are bad, some that have dialogue and we’re supposed to care about them… but we spend NO TIME with them during the rest of the film, so when they meet their demise, it’s like oh oooookay.

The DCEU has been struggling to keep up with their Marvel counterpart when it comes to making a quality superhero film. With Aquaman, it was better than Sony’s attempt at a live action superhero, but that bar was lower than the Mariana Trench. There are a few wrinkles that DC needs to iron out before making a sequel to this film. Aquaman may have benefited if it was released in January of this year or in the summer of 2017, because Thor: Ragnorak  and Black Panther are everything this film tries to be. Those films did a phenomenal job at world building and the characters matched the tone the films were set in. The positive is that with Aquaman the DCEU might be heading into the right direction. I am not 100% confident in saying that, but based on the trailer for the upcoming Shazaam, I think if future films continue on focusing on having some sort of balance and personality then they’ll be a more enjoyable experience.

Aquaman was released in theaters December 21, 2018.