Alita: Battle Angel answers the question that everyone has asked: “What would happen if the creator of Avatar teamed up with the creator of Spy Kids to create a live-action (with CGI) version of a Japanese manga. Reader, the results are as chaotic as they sound.

Based on Yukito Kishiro’s manga series Gunnm, directed by Robert Rodriguez, and written by James Cameron, Alita: Battle Angel is a cyberpunk action film that in the Year of Our Lord Two Thousand and Nineteen, finally made its way into the theaters after being stuck in development hell since 2003. The 20th Century Fox produced film has a cast of quality actors including 2019 Oscar nominee Mahershala Ali, Christoph Waltz, Jennifer Connelly, Jackie Earle Haley, Jorge Lendeborg Jr., newcomer Keean Johnson and Rosa Salazar as the titular character. With a budget of 200 million dollars, the film has a lot going on, good and bad, during its 122 minute run time.

What Alita: Battle Angel gets right is its visuals and Cameron’s ability to world build.  The film centers around  Alita, a cyborg who loses her memory and tries to learn who she is and where she came from. The only thing that looks kind of weird about Alita is that her eyes are larger than every other character in the film. With that said, her look is on-point with her previous incarnations. 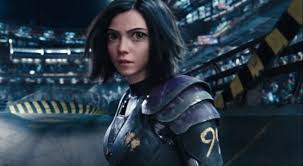 For a PG-13 this movie is violent and the action scenes are well-made. Being that the characters are mostly cyborgs, the film was able to take its liberties and create graphic scenes. The cyborgs bleed blue, which was most likely done so the film didn’t get an R rating. While the action scenes are fun and nice to look at, the film feels like it is trying to pack as much action into the film, story be damned. Robert Rodriguez’s camera work captures the action by utilizing slow-motion and knowing which angles give a sense of depth to the threat that Alita is facing. Here’s a clip of her fighting Grewishka (Jackie Earle Haley).

Rosa Salazar’s performance as Alita is delightful. She’s expressive  in her face and tone which in turn brings out the personality in the titular character. Christoph Waltz is pretty much just Christoph Waltz (which isn’t a bad thing) in his role as Dr. Dyson Ido. Ido is the doctor that finds Alita’s head in a junkyard and connects her to a body. He’s also a father figure for her and somehow acts as a moral compass. Jennifer Connelly pops up a couple of times as Dr. Chiren, she’s Dr. Ido’s ex-wife and she works for Vector (Mahershala Ali) the film’s main antagonist. Connelly didn’t add much to the film, but she and her character just felt like they were just there to be there. Jorge Lendeborg Jr. portrays the troubled teenager Tanji and it’s a complete 180 from his character in Bumblebee. Tanji has an attitude, teenage angst, and does not like cyborgs which puts him at odds with Alita.  Zapan (Ed Skrein) is a cyborg bounty hunter that develops and vendetta against Alita. Zapan and Alita have chemistry whenever they’re on-screen with each other and I wish that Zapan had a larger role in the film.

They did not give Mahershala Ali anything to do as Vector. Vector rigs the combat sport Motorball, but he’s being mind-controlled by Nova (Edward Norton). Ali’s performance doesn’t have any kind of nuance and he spends most of his time on-screen just being a generic villain. Ali felt underutilized for his talents, yet Keean Johnson felt overexposed for his. Johnson portrays Hugo, Alita’s love interest, and the role felt too big for him. Johnson has a lot of screen time and his character has an internal conflict, but he Johnson doesn’t have the range to pull off the emotions needed to make the character compelling. This is most apparent when he’s on-screen with Alita. As mentioned previously, Salazar is an expressive actress, just her voicework for Alita gave the character a dynamic feeling, but when adjacent to Keean Johnson’s Hugo it’s like they’re in two different films.

Sadly, the battle the Alita: Battle Angel  could not overcome was James Cameron adapting a manga into a coherent film.  Alita was scheduled to be released on December 21, 2018 but pushed its release date to February 2018 due to the competition of films that were supposed to be released in December. In an ironic twist, the 122 minute film tries to set up a franchise, yet packs a trilogy into a single movie that causes the plot to feel rushed just like one of its original release date competitors. The biggest problem with packing so much into the film is that the plot becomes messy, the story becomes boring and there’s no reason to be emotionally invested into the characters. This is why when certain characters meet their fate, it ends up being an eye roll moment. Apparently, James Cameron really wants this to be a trilogy, which is why this film is packed to the brim with things to expand on in future films.

Americans adapting manga into live-action films have been the iceberg that hit the Titanic (James Cameron reference) and Alta: Battle Angel falls in a long line of disappointing adaptations (Ghost in the Shell anyone?). The animation should be applauded because the world in the film is elaborate to the point that even background characters are meticulously detailed. Rosa Salazar was the perfect choice for the lead character and she brought out a sense of personality in a cyborg. If James Cameron and Robert Rodriguez decide to move forward for a sequel, I hope Cameron focuses on developing the characters the same way that the visual effects were. I’m not 100% sure if I would recommend this one on the big screen because outside of its visual aspects and the action scenes there’s not much going on that’s worth paying a full price ticket for. If you’ve got a big screen TV and a sound system then definitely wait for this one to come available on a VOD service.